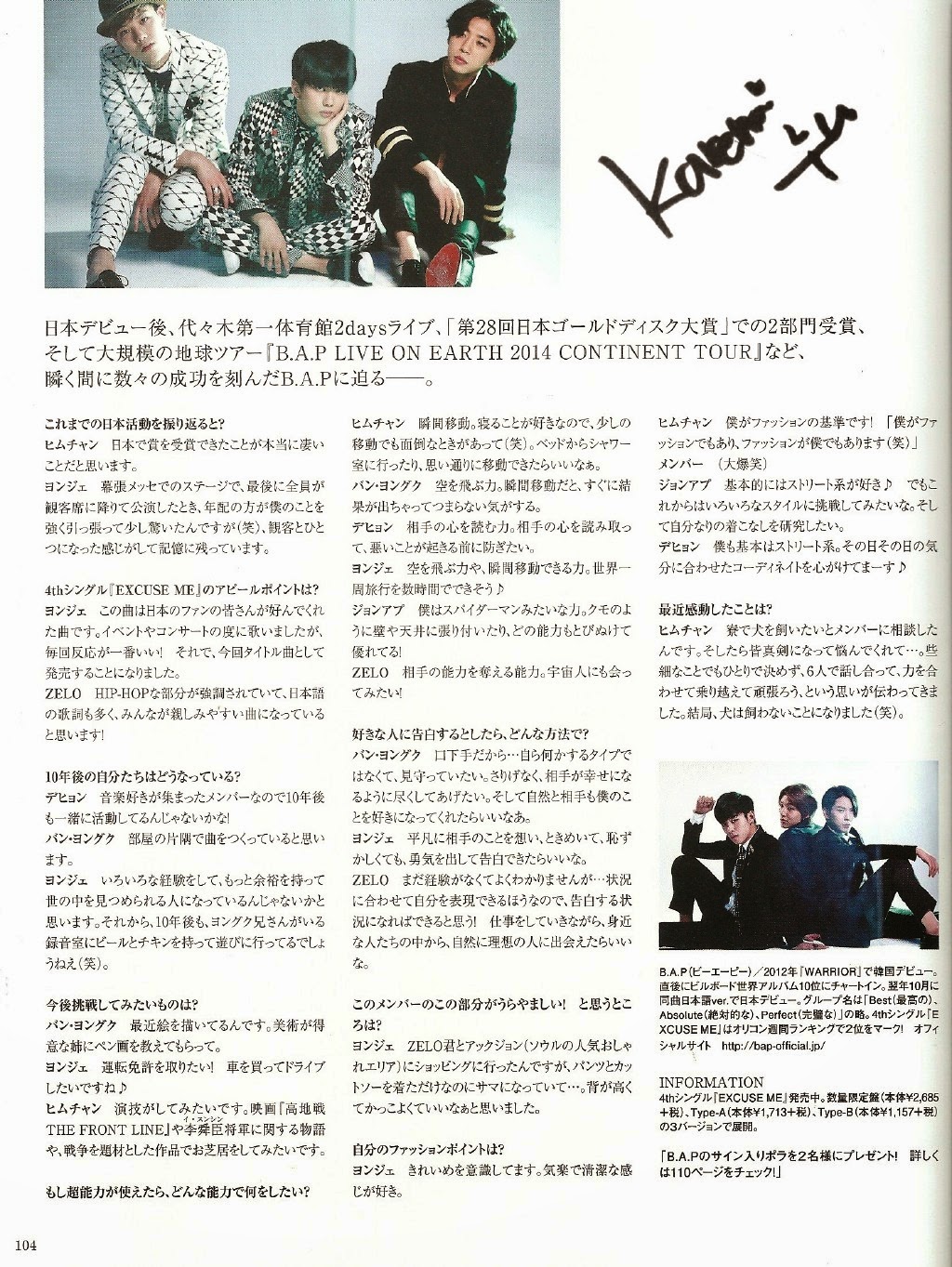 ﻿
﻿
1st Anniversary B.A.P
Since their awaited Japan debut, they’ve stayed in the upper ranks of the oricon charts. Strong-group B.A.P who’ve made their presence among the countless new debuts. With astounding results and success, we meet again with the more matured them.
After debuting in Japan, a 2-day live at the Yoyogi National First Gymnasium, two awards from “The 28th Japan Gold Disk Awards”, a large scale world tour “B.A.P Live On Earth 2014 Continent Tour”; numerous achievements have approached B.A.P in the blink of an eye.
If you look back on your Japan activities till now?
HC: I think that it’s really amazing that we were able to receive an award in Japan.
YJ: When we all went down from the stage in the end at Makuhari Messe, I was a bit surprised when an elderly pulled at me strongly (laughs), the feeling of becoming one with the audience stays strongly in my memory.
What’s the appealing point of your 4th single “Excuse Me”?

YJ: This song is one that Japanese fans have taken a liking to. We’ve sang it time and time at events and concerts, but the reaction each time was the best! So, we decided to release it as the title track this time.
ZL: The hip-hip section is emphasised and there’s a lot of Japanese lyrics too; I think it’ll be a song that everyone can approach!
How would you be in 10 years time?
DH: We’re a gathering of music lovers, so we’d probably be still promoting together in 10 years!
YG: I think I’ll be composing music in the corner of a room.
YJ: I think I’ll be able to become someone who can view the world with more scope after experiencing many things. Also, in 10 years, I might bring beer and chicken the recording studio that Yongguk hyung is in and visit him (laughs).
Things you’d like to challenge from now on?
YG: Recently I’ve been drawing. My older sister who’s good at art has been teaching me pen art.
YJ: I want to get my drivers license! I want to buy a car and go for a drive ♪
HC: I want to try acting. I’d like to act in a work that revolves around war, like the movie “Kouchisen The Front Line” or the story about General Yi Sun-sin.
If you could use a superpower, what power would you like?
HC: Teleportation. I like to sleep, so even moving a little is bothersome (laughs). Something like teleporting from the bed to the shower, it’d be nice if I could teleport where I want to.
YG: The ability to fly. With teleporting, you get your result straightaway so that’s a bit boring.
DH: The power to read one’s mind. I want to read someone’s mind and prevent bad things before they happen.
YJ: The ability to fly and teleport. Seems like I’ll be able to travel around the world in a few hours ♪
JU: For me, powers like Spiderman’s. Sticking onto walls and ceilings, each power is outstanding and excellent!
ZL: The power to steal another’s power. I want to meet aliens!
If you were to confess to the one you like, how would you do it?
YG: I’m bad at speaking so… I’m not the type to do something from myself, I just want to watch over them. In the background, I want to do my best so that they can be happy. And then, it’ll be nice if they will naturally fall for me.
YJ: I will think about them, feel exhilarated, and courageously confess even if I’m embarrassed.
ZL: I don’t have any experience so I’m not too sure… I’m one to express myself according to the situation, so if in the the condition to confess then I think I’ll be able to! It’ll be good if I can meet my ideal one naturally from the people close to me whilst working.
What’s something you think “I’m envious about this member’s trait”!
YJ: I went shopping with Zelo-kun in Apgujeong, and although he was just wearing pants and a cutsew, he worked it really well… I think it’s nice that he’s tall and cool.
Your own fashion point?
YJ: I keep a kireime [T/N: Japanese mens fashion term for conservative & minimal dressing] style. I like a comfortable and clean feel.
HC: I am the the standard for fashion! “I am fashion, and fashion is also me (laughs)”.
All: (Bursts out laughing)
JU: Basically, I like street style ♪ However, I want to challenge various styles from now on. And experiment dressing in my own way.
DH: I basically like a street style as well. I keep to coordinating with how I feel day to day~ ♪
Something that touched you recently?
HC: I discussed with the members about raising a dog in the dorms. And then everyone was became serious and mulled over it… The thought that even for little things, instead of deciding by myself, the six of us talking over it and coming together and working hard to overcome something came to me. In the end, we decided to not get the dog (laughs).
"I was surprised that many elderly fans came to our Japan events and concerts. Seeing them at the venue, I unconsciously lowered my head to them. I’m happy that there are many fans that support us as a family." - Daehyun
"After starting Japanese activities, I’ve come to watch more media relating to Japan. I get to see what everyone is interested in right now, and I also learn expression." - Youngjae
"From the presents that I receive from fans, my knowledge on fashion brands and Japan that I had yet to know has increased." - Zelo
"After debuting in Japan, I still can’t forget the nervousness from recording our first stage on NHK’s "Music Japan". I don’t get nearly as nervous in Korea." - Himchan
©KarenaxNaNa | Translation ©cassie_babyz 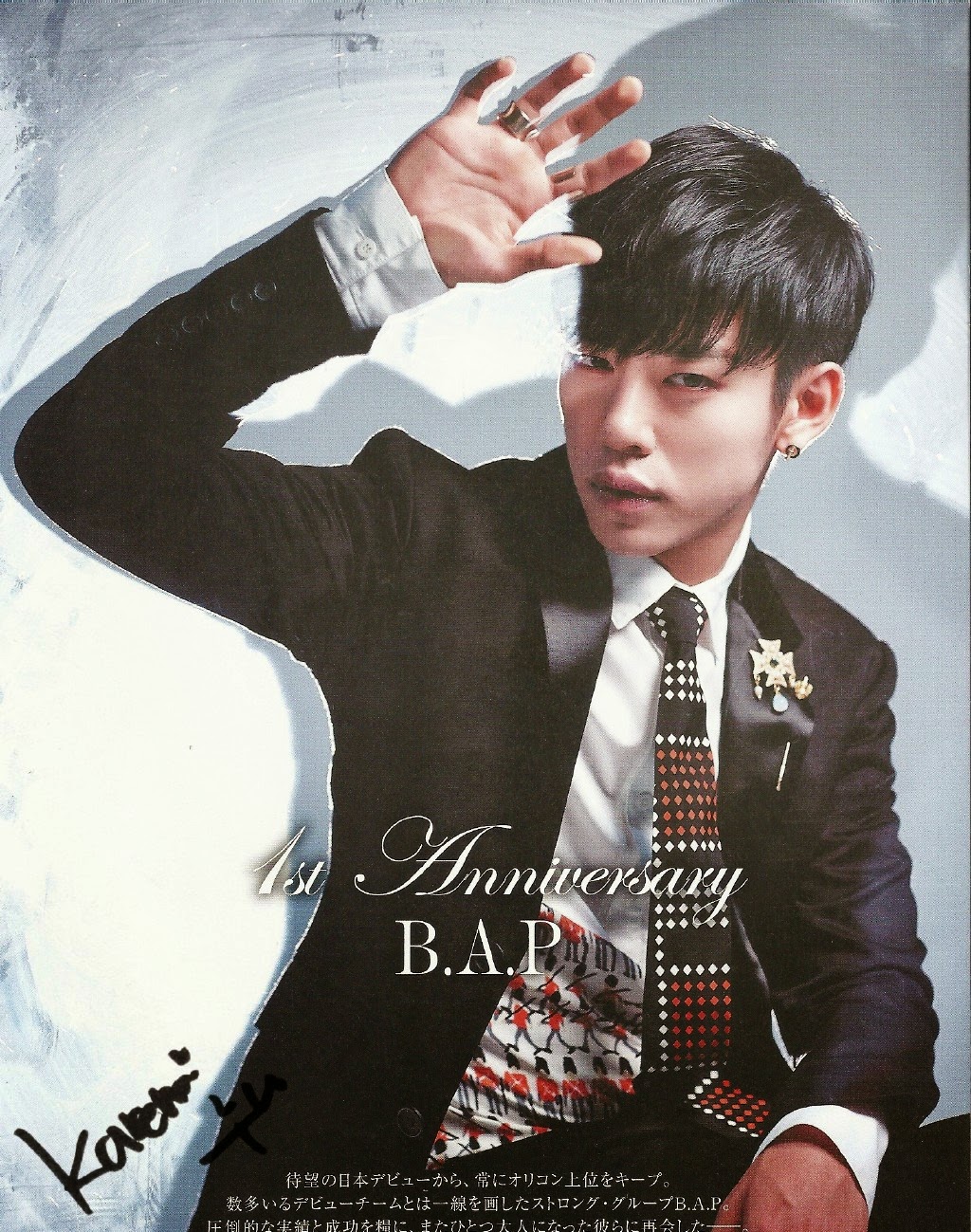 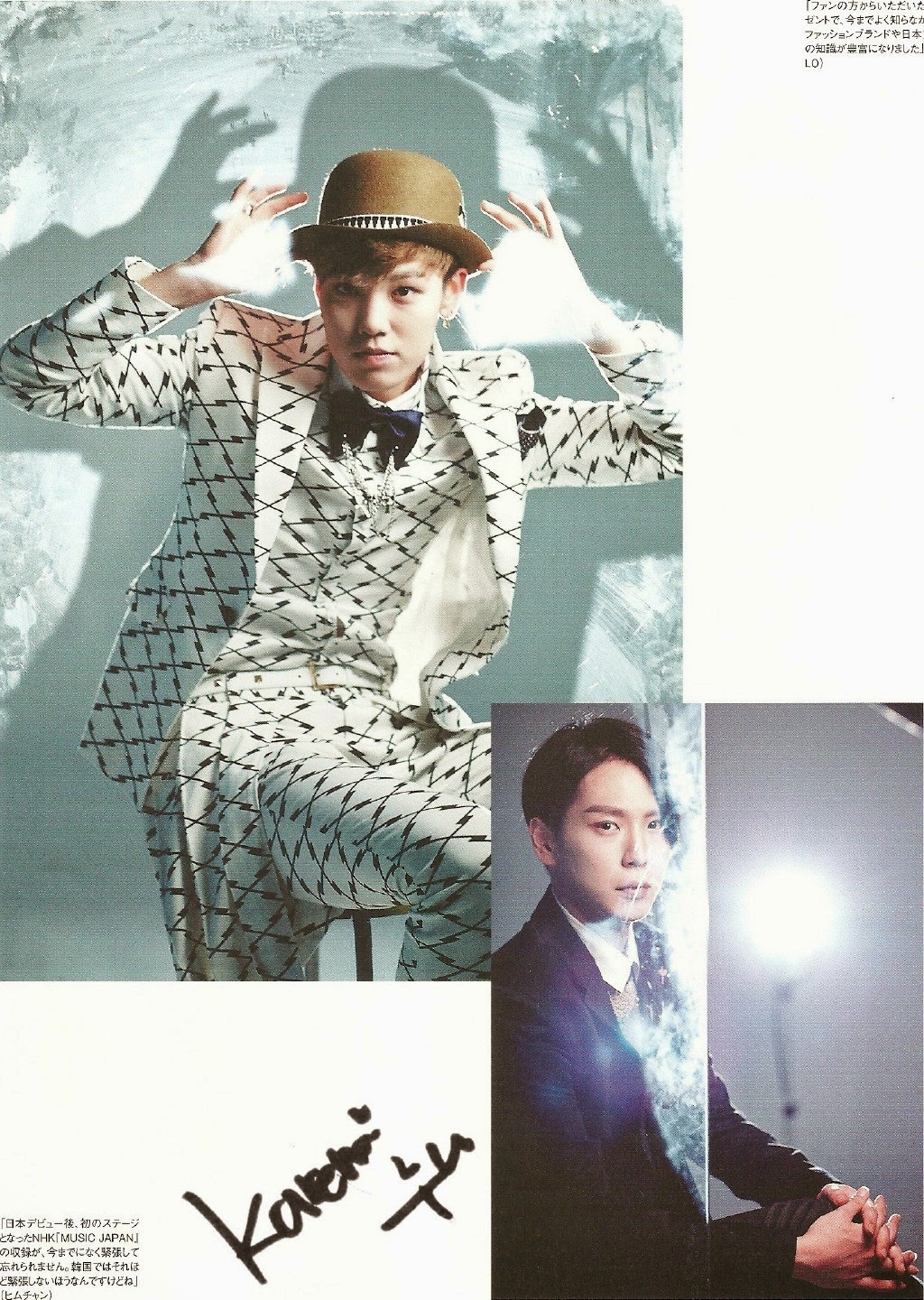 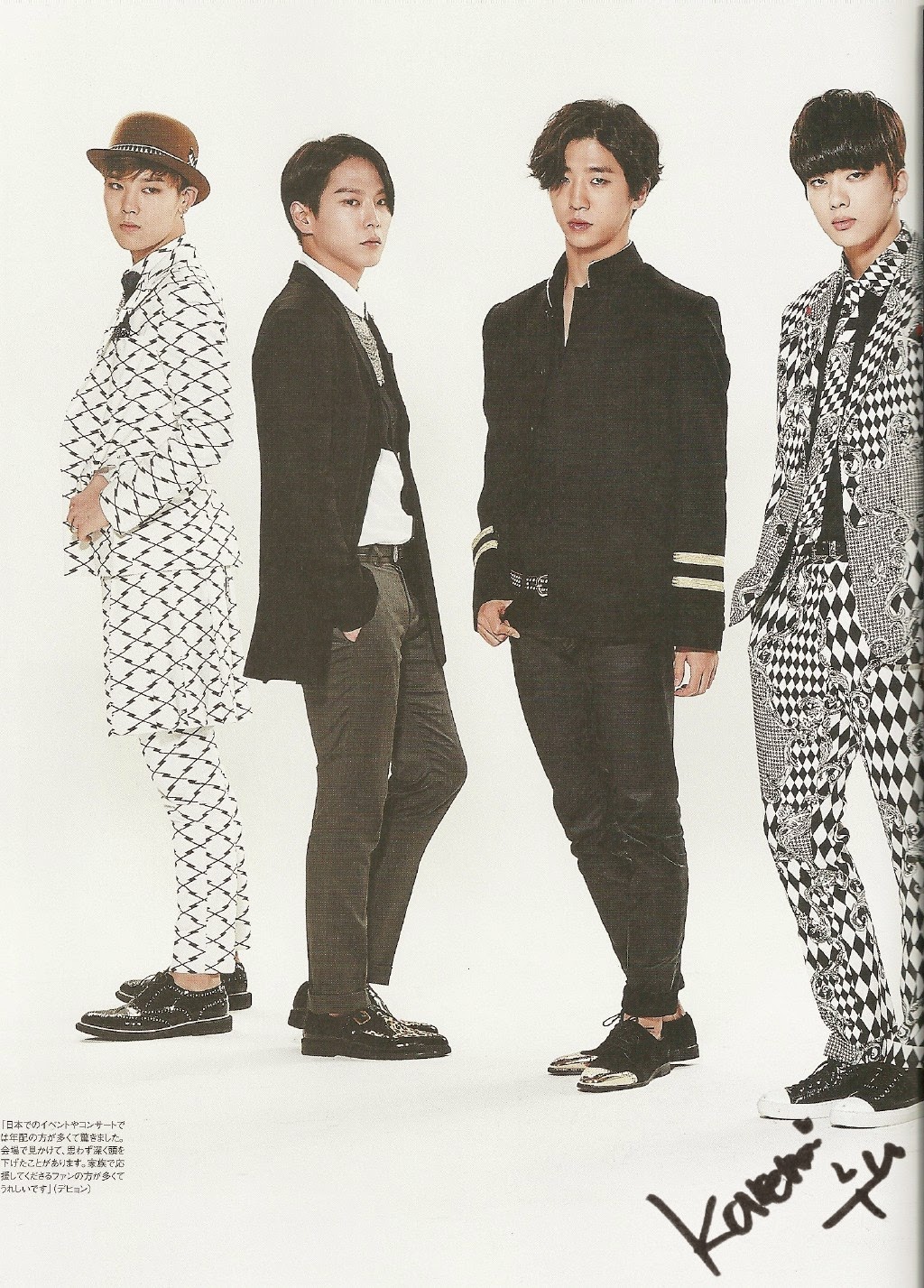 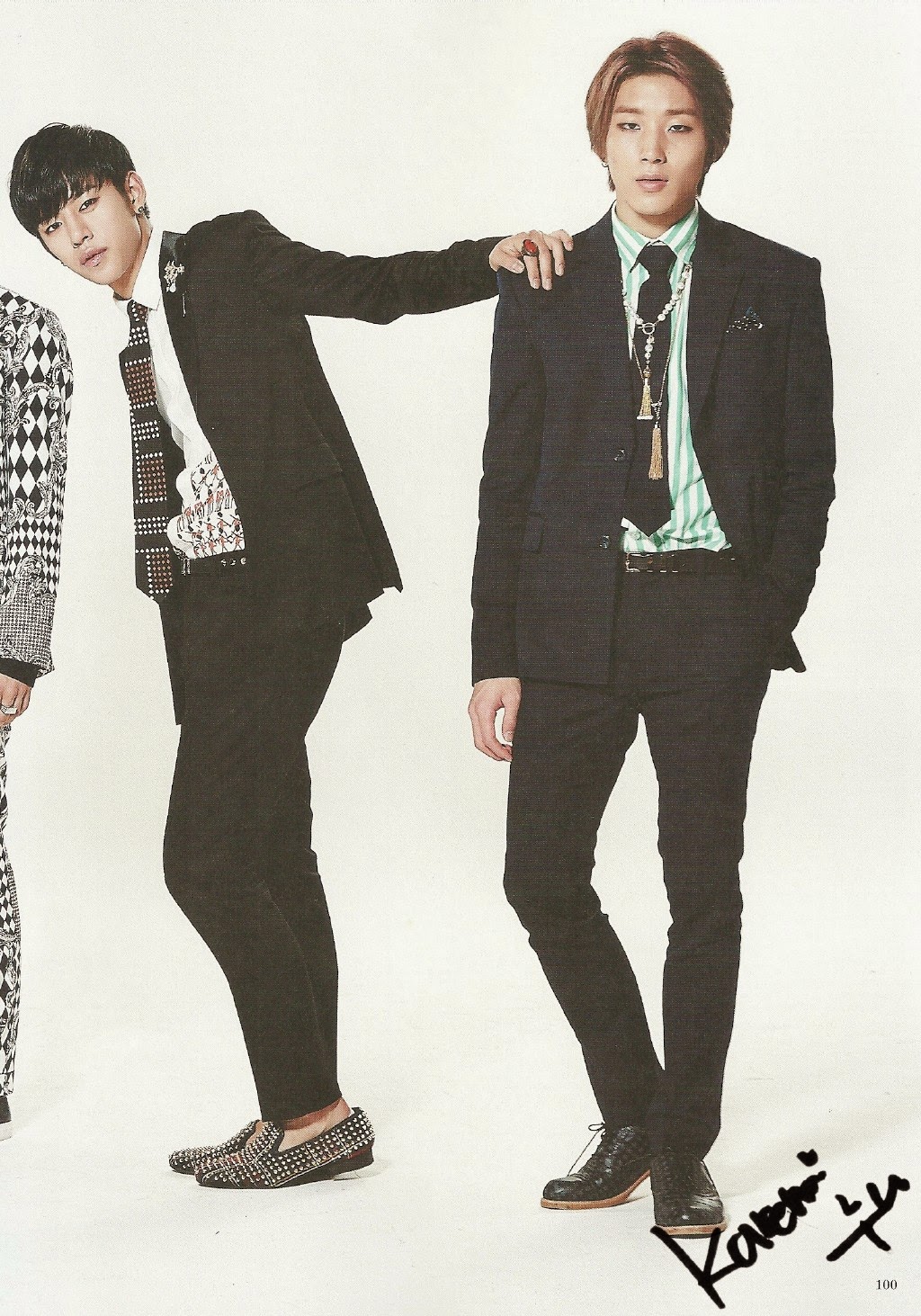 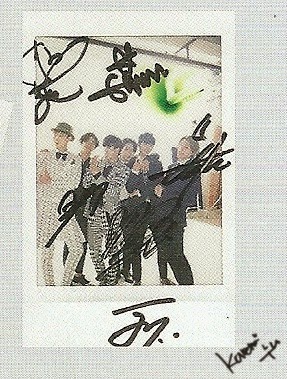 B.A.P will appear in both High Cut Japan vol 6 as well as in High Cut Japan Special collection with an 8 page feature, and special larger pages! Available in Japan Oct. 22﻿ 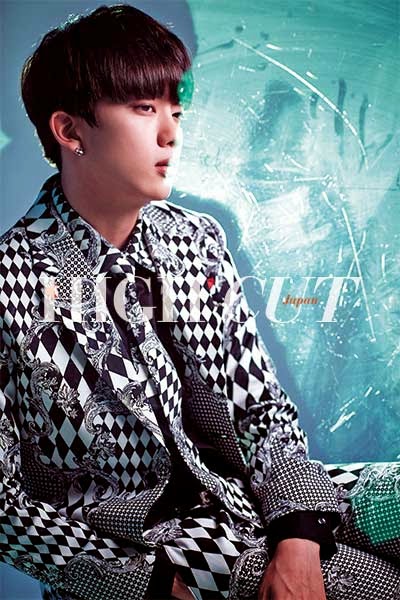 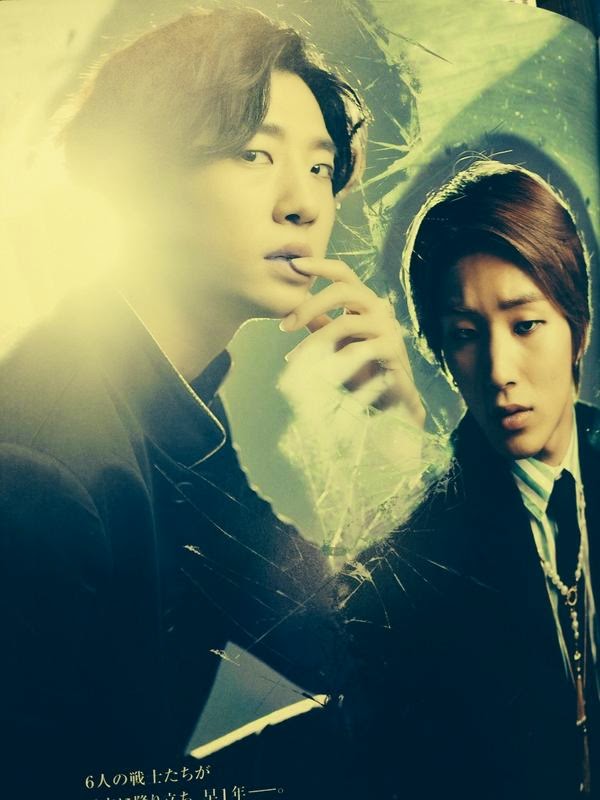 Email ThisBlogThis!Share to TwitterShare to FacebookShare to Pinterest
Tags 2014:interview