Most fans here in the UK aren’t a particularly bad bunch, however due to past events (Read: EXO in London), we’re starting to get a bit of a reputation for ourselves. So at the request of a couple of readers, we thought we’d put together a quick reminder of ‘go’s and ‘no-go’s to ensure B.A.P leave with great memories of London and the fans in the UK – and the rest of Europe.
To save the positive for last, we’ll fly through the things we shouldn’t be doing at their European shows. We don’t mean to be impose-y, though most of this is common sense. 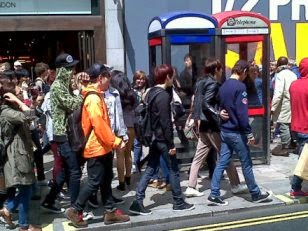 Cameras in the venue
There are no cameras allowed in the venue. This is a tough one to follow, we understand, but this is what the concert promoters have decided. So if you do try to bring a camera into the venue, you do so at your own risk. Your camera will likely be confiscated and any further action is down to the promoters.


Camping outside the venue
At about every concert, probably ever, there are always people who have camped outside the venue in order to secure themselves a spot at the front of the queue. However, Brixton Academy advise against doing so. Not only will you probably get sent away, but Brixton can be a rough area, it’s not safe and the venue can’t be held responsible for anything that happens – hence why they’d advise against it. Instead you can set up ‘camp’ early in the morning if you’re really gunning for that front-of-queue spot.


Tailing the B.A.P members
This is less of a regulation, and more of a polite thing to do. One of the things that got UK fans name in the mud from EXO’s visit, was the fact that a bunch of us followed them, everywhere. There was a little harassment involved too, and that’s never fun. We understand everyone wants to see and/or meet B.A.P, but remember how many of us there are and how little time they have here in the UK and Europe. We’re not saying not to try to see them, but once you have, though tempting it may be, please try not to follow them around London from there and if you meet them please be polite.


The ‘loof’ is not on fire
This is a concern that was raised to us by a few readers. Allegedly at previous LOE concerts, fans made fun of Himchan’s mispronunciation of ‘roof’, which seemingly upset him. Despite it being upsetting to Himchan, there are fans who plan to shout ‘the loof is on fire’ at their Europe shows too. Please, please, please don’t do this.


Pushing in standing
Pushing in the standing area is something that always happen, because let’s be honest, people are excited and want to get as close to the stage as possible. However, this usually results in a number of people fainting and having to be taken out. It’s extremely dangerous and idols have stopped mid-concert to usher people back before due to people not listening to security.


The bottom line here is that we really just need to be polite, which should be something we all do anyway. We don’t want to scare off B.A.P from ever making a return to the UK and Europe, do we? If you’re feeling a little dragged down by these ‘no-go’s, don’t worry, we’re on to the good stuff now. 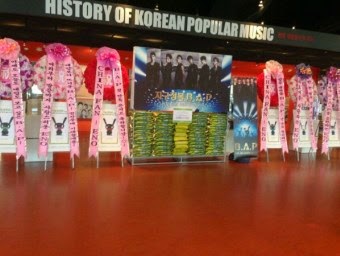 Gifts for the members
Normally to deliver gifts to K-pop groups that visit, we have to either wait at the airport, track them down or throw it on stage. None of these are particularly safe, but luckily there’s to be a solution this time; the organisers are to have boxes out for gifts. So if you’ve got a letter or a small gift for the boys, pop it in the box and it should make its way to them – no fuss.


Photos of the concert
I know, we just went over that there were no cameras allowed, but that doesn’t mean there will be no photos of the concert. We’ll be sending a couple of photographers into the press pit to get the best photos we can for you guys. Mega HD, we promise. Yes, we’ll try and get an abs photo, too.


Message for B.A.P
Linking on to our sending of staff, there will be a camera going around with our Head of Video Content, Adam. He’ll be interviewing anyone up for a chat, and we’ll be snapping a few photos. If you see us about, be sure to come over!


Other projects
Along with our own plans, there are others who will be around outside the venue with more projects to participate in, for example these ones, or even this one. We’re sure more will pop up on the day, so there’ll be plenty going on as we wait for doors opening.


Lightsticks and whistles
Lightsticks and whistles are a go at Brixton, hurrah! But use them wisely, as those who use them inappropriately will be asked to leave, and frankly getting kicked out over a whistle isn’t all that worth it. Additionally some posters/banners are allowed too, though not too large. We’d recommend keeping it around A3 or below so it doesn’t get confiscated, and so you can hold it without blocking others’ view whilst in the hustle and bustle of standing, unless you’re seated that is.


Love calls
So we already went over not saying ‘loof‘, and we should probably add not to say anything else rude either. However if you want to scream you love the members then you go, man. Anything positive is more than welcome.


Making friends with other fans
This isn’t something you have to do, since you may well be going with friends already. But the one thing that always makes a K-pop concert greater, is making new friends with fellow fans. If you’re seated it’s always fun to make friends with your neighbours too.


BAPYESSIR has compiled a document of fanchants for B.A.P’s title tracks. Print it out or save it to your phone and give it a bash, it’s great fun.


Got anything else to add? Let us know! Hopefully we can give B.A.P a wonderful time in Europe.
©UNITEDKPOP

Email ThisBlogThis!Share to TwitterShare to FacebookShare to Pinterest
Tags 2014:misc